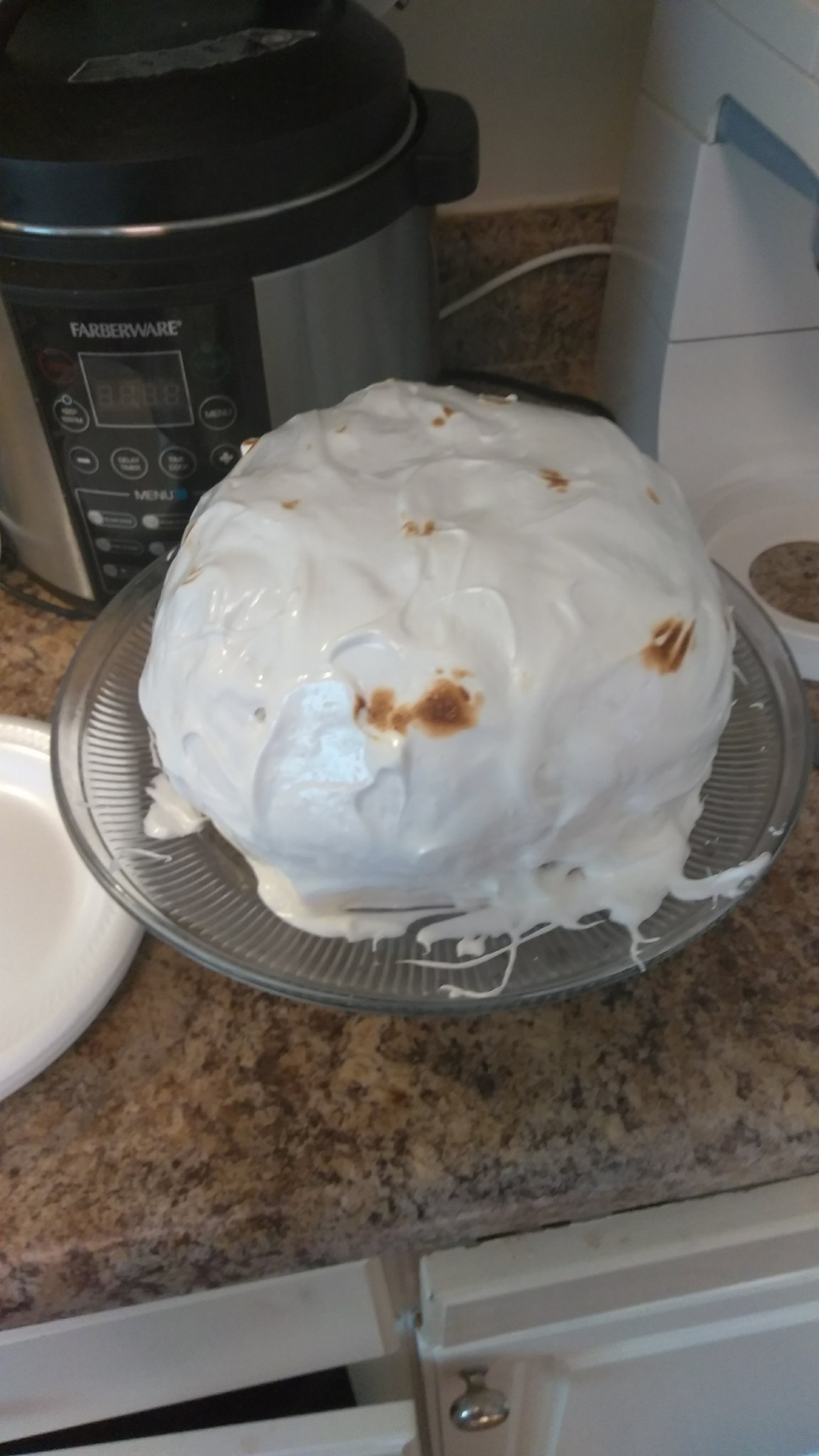 I’m not even going to waste time and look at the date of my last blog post. It’s going to make me disappointed in myself temporarily and ultimately dampen my good mood. So on with the good stuff, this blog post is going to be jam-packed with lots of good stuff so let me not waste your time either!

I haven’t had the chance to cook that much in the last week because it was one of those weeks. If you have kids and a busy schedule, sometimes you have a period of time where it feels like all you’re doing is moving. In and out the house all day, every day for multiple days in a row. The day-to-day life of the daily grind Monday through Friday is already exhausting but add appointments, extracurricular activities, repairs, school activities and the extra stuff that you don’t do each day and you can find yourself winded by the time it’s all said and done. Actually the last two weeks have been like this, now that I think about it. The Baked Alaska I’ll be sharing today was made on Monday, April 16th as the second cake for my oldest son’s 14th birthday.

His first cake was a store brought 1/2 sheet cake with half yellow cake and half devil’s food chocolate with whipped icing. The second cake was my first Baked Alaska. After being given the idea by one of my sons’ dentist I decided that it would definitely be a good recipe to try. It looked complicated once I realized what a Baked Alaska was. I think I confused it with Baked Apples, I dunno.

So now since I knew what Baked Alaska consisted of, I found that there were many flavor variations that could be used to construct the cake. First you should know what Baked Alaska is in case you don’t. It’s a cake that has been topped with ice cream and browned meringue according to Wikipedia’s definition that popped up in my Google search. With that being said, the possibilities are endless when it comes to what direction you choose to go in. This was also the perfect cake for my son because like a Baked Alaska he is sweet and cool. He has many layers to him just like the cake I dreamed up and I love that the most about him and the young man he is growing into. My son loves Brownies so I decided to make the cake layer 2 layers of Brownie. The Ice cream layer was a first layer of cookies and cream ice cream and a second layer of caramel ice cream. The Meringue covered it and encased it a fluffy covering that encased the ice cream and brownies.

I decided to short cut the brownies for the first layer by using a box brand mix from the grocery store. The instructions were pretty straight forward – I bought disposable cake pans because I didn’t want a ton of dishes in the sink afterwards. I sprayed my pans with Baking Spray and then mixed together the brownie batter. The brownie batter was then poured into the cake pans. At that point I realized that I should have just made 1 layer of brownie as the second pan was barely enough to call it an actual layer but I went ahead because I didn’t want to pour that batter into the other pan since it had the baking spay in the pan too. It might not have changed the brownie batter but at the same time I didn’t want to risk it. I wouldn’t have time to fix it and have it ready to eat on his birthday. I just made a mental note to check the brownie layers as the smaller layer would cook faster.

The first brownie layer was perfect brownie texture, the second was a thin almost cookie like version of the brownie. I shuttered for a moment and kept moving. It was too late to turn back now. During the brownie baking I put together the ice cream layer. First I lined a plastic bowl with several layers of plastic wrap making sure to leave enough hanging over the bowl to pull the ice cream out once frozen. Next I scooped the thawed ice creams into the bowl and wrapped it closed before freezing it again. 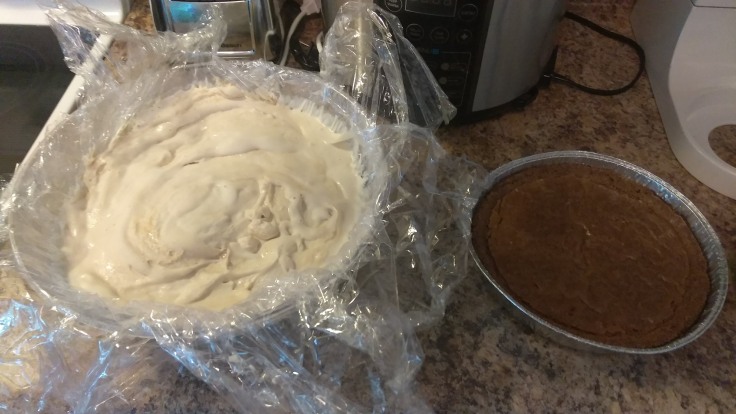 Before making my meringue I assembled the brownie layers on the bottom and then put the ice cream dome on top before wrapping it all together in the plastic wrap. The recipe I used to guide me cut the excess ice cream or cake off. I hate waste so I just used my hands to mold the ice cream in shape with the brownie layers, re-wrapped it and returned it to the freezer. 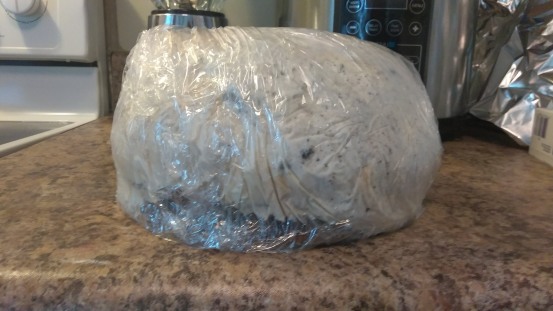 The wrapped layers of ice cream an brownies. 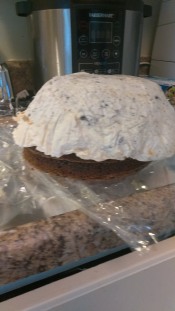 The ice cream dome on top of the brownie layers before wrapping.

In most of my research the meringue is assembled over a double boiler however the recipe that I used did not. So I separated my eggs, putting the whites in a bowl with the cream of tartar. I used my hand mixer to beat the egg whites and tartar for so long that my arm started to hurt. When I saw the peaks beginning to form, I got excited and stuck my (clean) finger in the foam and then I unknowingly licked my finger. Gross! There was no sugar in that yet so that was totally disgusting. Back on track I added in the remaining ingredients and continued to beat it together. Truly I’m positive my meringue was still a little lacking but I would have to play around with this recipe another time to troubleshoot what might have gone awry.  With the meringue to my satisfaction I removed the frozen layers and unwrapped it on top of a cake stand. I did this all very fast as the kids were done eating and anxiously awaiting the second cake – the nerve of these kids right?

Next I began spreading the meringue all over the dome until it was completely covered. Of course my torch lighter was low on fluid and it would have given me that perfectly browned look I was going for. Even putting it in the oven on Broil didn’t give it the browning I was looking for. My last resort was my husband’s torch lighter that allowed me to just touch a few spots. I was done and it was time to serve the Baked Alaska Brownie treat up.

The Baked Alaska was a hit. It was absolutely scrumptious. The brownie layers complemented the other, the soft chewy one made the crispy one just as good. I’m glad I opted to use two flavors of ice cream. The caramel was smooth and rich – the cookies and cream was sweet with bits of cookie. The meringue was light and salty. (Not sure if I goofed or if this was mixing issues) Even the salt was good, with all the sweet it was just enough to tie it all together. Everybody loved the cake! My sons friends and some random kids devoured the whole cake and poof, in an instant it was gone. My son graciously thanked me for the cake and his great birthday party with a great hug. I was pleased all around. Though I had some issues, baking and otherwise (the first laptop I bought hours prior had a screen issue), it still turned out to be a great day and that’s all that I care about…the people I love knowing that they mean the most to me and them showing them how.

With my sons’ birthday behind me I had a quick moment to tighten up the backyard. So I pulled out my trusty Weedeater by Briggs & Stratton and prepared to do a quick cutting of the grass. To my disbelief and horror my lawn mower failed to start repeatedly. I checked everything. It had oil. It had gas. I moved it to a flatter location, primed and pulled the cord – still nothing. My heart began to sink. Yes I said it, my dead lawn more made me sad. One I like for my stuff to work and be operational especially when I need it but then I hate having to replace things or have them fixed. People aren’t honest or do the best work these days so nine times out of ten I would just buy another one. I’m too crafty and handy for that and my husband sparked my interest when he said that I might need a new spark plug. To YouTube I went in search of lawn maintenance videos. I did my research and found out what parts I needed and how to do the tune up to my lawn mower. I picked up the items over the next day or so, I think I found everything at Wal-Mart which was great because I feel like I live in Wal-Mart sometimes.

Yesterday, armed with my oil and spark plugs (I bought two different ones because I wasn’t 100% sure), the toolbox and my lawn mower I proceeded to perform the tune up. I needed a torque wrench though and I couldn’t find it. I’m certain we had one but I was at a standstill if I couldn’t change the spark plug. By the time I rounded my house a second time, checked our pick up truck and then re-checked the closet I still hadn’t found it. Something just said, “Tameka try to start the lawn mower up.” I did and it started right up just like it usually did. I let it go, and started it again, and it roared back on. Yay, I shrieked in victory. I ran inside, changed shoes and got back to my working lawn mower.

Yeah I know you were hoping for maybe more detailed instructions but in general good maintenance on your lawnmower is changing your oil and air filter (if you have one) and changing your spark plug. Some videos suggest cleaning the carburetor too. Surprisingly all of these tasks are fairly simple with the right tools. Also FYI, I believe you can borrow tools from AutoZone which I will keep in mind when I do have to actually change the spark plug.

The life lesson in this whole thing, don’t let anything get in your way of getting something done. I just walked away from my lawnmower for a couple of days and then it started working again. Moral: It wasn’t as bad as I originally thought it was. What else in your life can you apply that too? I don’t know but it was a simple moment that made a big impact and yet I am all the better because when my lawn mower does need maintenance I have broken the cycle of repair or replace. I instead can resolve on my own first, or at least try to. If by some chance that doesnt’ work, I’ll go back to replace or the repairman.

Be blessed and be a blessing!

A Very Pleasant Mom of 4…Tameka

This is a text widget. The Text Widget allows you to add text or HTML to your sidebar. You can use a text widget to display text, links, images, HTML, or a combination of these. Edit them in the Widget section of the Customizer.