It’s been 16 days since my last post. I’m so ashamed. To the few of you who have graciously followed my blog, please accept my apologies yet again. If it’s one thing I have been trying to build – is consistency. I truly enjoy doing this, and even more so when I can see the fruits of my labor being the page views, likes and Comments. When I can create engagement on various topics it brings a sense of validation and reward for all of the hours spent crafting this blog. Yes there is a lot of time and work that must go into this even as a newbie or beginner.

In the meantime I haven’t cooked much at home lately. I’ve had a lot of things to do personally for my household in the last couple of weeks that have dominated my time which means we’ve eaten a lot of take-out or fast food. Out of ideas and a little disappointed with some of the food selections I found my next dinner idea on Pinterest as usual. There was another video by http://www.tasty.co for a Panda Express inspired Orange Chicken. If you remember a couple of blog posts back I debunked General Tso Chicken, a family favorite. So Orange Chicken is the next best thing that all of my family members like collectively. I was thrilled to see this video and find the recipe. I thought that this would be a great follow-up to the General Tso recipe that came out great! So mind you I was going into this confidently. How much harder could this be?

Upon review of the video and recipe I was slightly surprised by the wet batter the recipe uses to batter the chicken thigh chunks. I was intrigued to see the difference because one of the good things about a good General Tso or Orange Chicken is a good base fry on your chicken. If the chicken is fried crispy enough even the saturation of the sauce won’t soften the coating too much. It will coat it instead like a smooth glaze. But back to the Orange Chicken. The recipe is pretty straight forward. There are two different ingredient lists, one for the chicken and another for the orange sauce. I actually had everything on the list on hand with the exception of the boneless skinless chicken thighs because I cook those a lot.

Step 1 instructs you to cut the boneless skinless chicken thighs into 1×1 inch cubes and set aside. Simple. I would also suggest to trim off any extra skin, muscle or bone that might have been left on by the butcher. The picture below shows the excess skin and fragments I cut off my chicken cubes.

Once the chicken is cubed the wet batter is prepared by combining the dry ingredients first and then incorporating the egg, water and oil. The recipe even suggests that you aim for the consistency of pancake batter. Easy enough.

Step 4 is where you add the chicken cubes to the batter and refrigerate for at least 30 minutes. In the meantime I heated vegetable oil in a small pan to fry the chicken cubes. I wanted to use my Wok to make my Orange sauce although the recipe instructs you to use the wok or a heavy bottom pan to fry in. The oil temperature should reach 350 degrees Fahrenheit before it is ready to fry. The recipe recommends cooking the chicken for 5-6 minutes until lightly golden brown. Personally 5-6 minutes was still a little light, so I probably cooked mine for almost 9 minutes before I pulled them. They looked liked Chicken Tempura or the base of sweet and sour chicken. With the first part of my dish being complete I began heating up vegetable oil in the wok to make the orange sauce and I made a huge mistake of heating my oil up too hot too quickly. When I added in the ginger, garlic and pepper flakes it burned quickly and blackened in the pan. I had to scrap it and start over at a lower temperature to get the mixture “shimmered” as the recipe instructs. Next the sugars are incorporated and then the orange juice. Once dissolved there is vinegar and soy sauce added before lastly adding in the cornstarch and water. (Tip – if the cornstarch and water mixture hardens, a couple of drops of water will loosen it to liquid form). It took a few minutes of cooking while stirring and increasing the heat to get the syrup like texture but once it was to my liking I added in the fried chicken cubes and stirred it until it was all covered in the Orange Sauce. The recipe’s 16th step instructs to top with sesame oil. I omitted this step because of my husband’s allergy to nuts and seeds.

With the Orange Chicken finished I also upped the ante a bit when I also prepared Panda Express style Chow Mein Noodles to accompany the chicken. I’ll have to share that recipe another time but here’s a pic of it till then. Of course I added shrimp to my version. 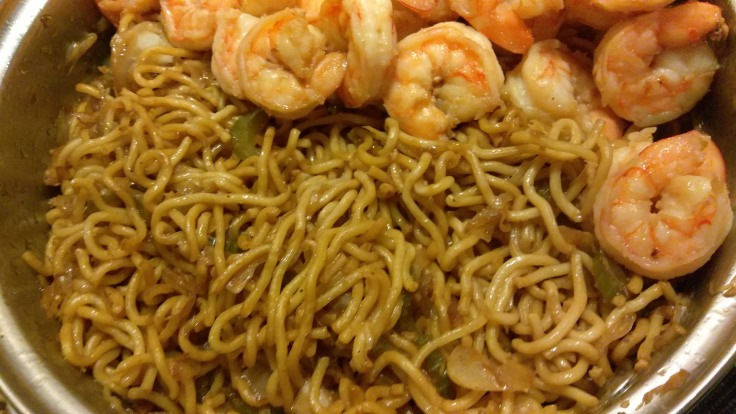 Overall my family liked the Orange Chicken. That means it was okay and I would have to agree because when my family loves something – they loooovvvveeee it! This was mildly okay. The orange flavor was their though I would double the sauce as it was a little skimpy. I might have fried more than 2 lbs of chicken cubes though. Also, I am not a fan of the wet batter effect. I probably would opt to fry the chicken a lot longer if I use the wet batter because some pieces tasted a little soft and almost mushy with the orange sauce covering it. All around I would use the dry batter to fry and keep the sauce the same. This was still a hit though because we all ate it and enjoyed it. The Chow Mein was the star of the night with the sautéed cabbage, onion and garlic and soy sauce mix. This version was better than Panda Express if I have to say so myself.

On a scale of 1 to 10, I give the Orange Chicken a 6. If the texture of the breading was to my liking I would have given it a 8. I followed this recipe closely and thought that it could have used more orange flavor. Maybe the zest of an orange rind might deepen the citrus flavor. I will definitely give this recipe a second try with the modifications described because this is always a great alternative to the fan favorite, General Tso.

And there you have it folks, another recipe debunked! What do you think? Check out the recipe and give it your best shot! I’d love to know how yours turned out! So check this out, upon review of the website they have a different recipe for Orange Chicken that calls for orange zest and rice vinegar. That one sounds like an elevated version of this one. Good information to have so you can make the choice of which Orange Chicken you’d prefer.

This is a text widget. The Text Widget allows you to add text or HTML to your sidebar. You can use a text widget to display text, links, images, HTML, or a combination of these. Edit them in the Widget section of the Customizer.